Canada’s Provincial Nominee Program at 20: Helping more people immigrate and succeed the PNP will grow at a quicker rate than any other immigration program over the next 3 years

Since its inception 20 years ago, Canada’s Provincial Nominee Program has grown in both size and importance and now stands as the country’s second-largest program for economic immigration. 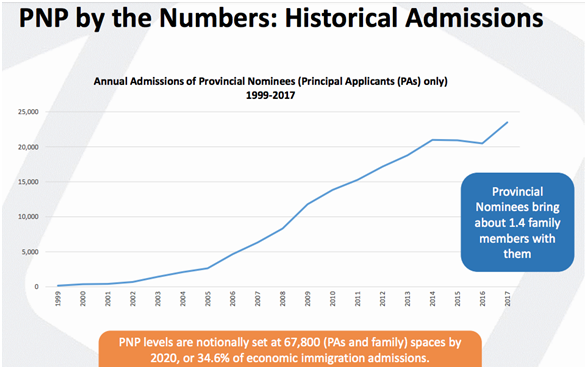 From its humble beginnings in 1998, when around 200 people were admitted to Canada through it, the Provincial Nominee Program, or PNP, will be responsible for more than 30 percent of planned economic immigration to Canada in 2018.

The PNP allows participating Canadian provinces and territories to select an allotted number of economic immigrants each year and nominate them for permanent residence.

There are now more than 60 PNP streams across 11 provinces and territories, with each one specifically designed to target immigrants who match specific labour markets and economic needs in those regions.

Most participating provinces and territories now have at least one PNP stream that is aligned with the federal Express Entry system, which is Canada’s principal source of economic immigration.