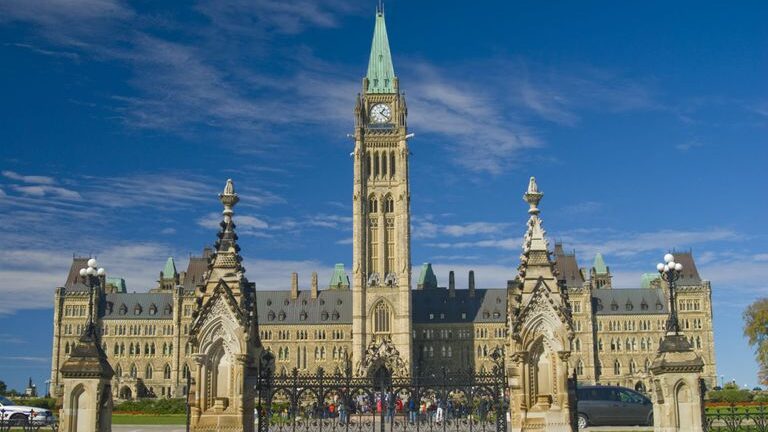 The anticipated year-end report says Invitations to apply, or ITAs, issued to candidates in the Federal Skilled Worker Program rose from 8,332 in 2016 to 41,364 in 2017 while invitations issued to Canadian 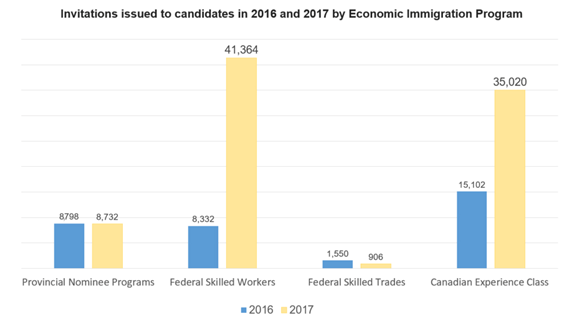 The unprecedented number of ITAs issued in 2017 corresponded with the lowest Comprehensive Ranking System (CRS) cut-off score yet seen – 413 – on May 31, 2017.

“The Express Entry pool is now the main source of permanent residence applications for the economic immigration category of IRCC’s multi-year immigration levels plan,” Immigration, Refugees and Citizenship Canada says in the report.

While the 2017 results were the highest ever reported, the immigration levels plans for 2018, 2019, and 2020 call for increases in the number of admissions through Express Entry.

IRCC said the targeted changes have had a major impact on the occupations represented by candidates who received an invitation in 2017.

Information Systems Analysts and Consultants, Software Engineers and Computer Programmers and Interactive Media Developers remained unchanged as the top three occupations between 2016 and 2017, but the number invited in each category increased substantially. Meanwhile, occupations like cooks, food service supervisors and retail sales supervisors dropped noticeably in the occupational rankings between 2016 and 2017.

IRCC said reducing the points for a job offer has worked to favour candidates with higher core human capital scores.

“The Arranged Employment additional points are now balanced with the core CRS (that is, human capital), which means that candidates with a qualifying arranged employment need a sufficiently high core CRS to receive an invitation,” IRCC said.

The report also noted that 43 percent of the 8,195 invited candidates in 2017 with Arranged Employment points benefited from a Labour Market Impact Assessment exemption.

Looking at the top 10 countries of residence of invited candidates in 2016 and 2017, India and the United States remained the top two foreign countries of residence. China, which was third in 2016, was replaced by Nigeria and dropped to eighth place in 2017. Canada was ranked first overall both years, but the percentage of people living in Canada who received ITAs dropped from 64 percent in 2016 to 49 percent in 2017. 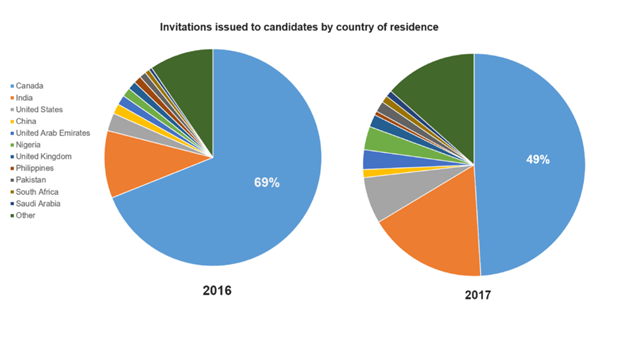 “The much anticipated 2017 year-end report provides many additional details as to who Canada is inviting to apply for residence and how the Express Entry system is improving.”

“The report also adds to the anticipation around Express Entry this year: With increased immigration targets, the elimination of the pre-express entry backlog, and changes from mid-2017 having an entire year to play out, 2018 should also be a very interesting year.”