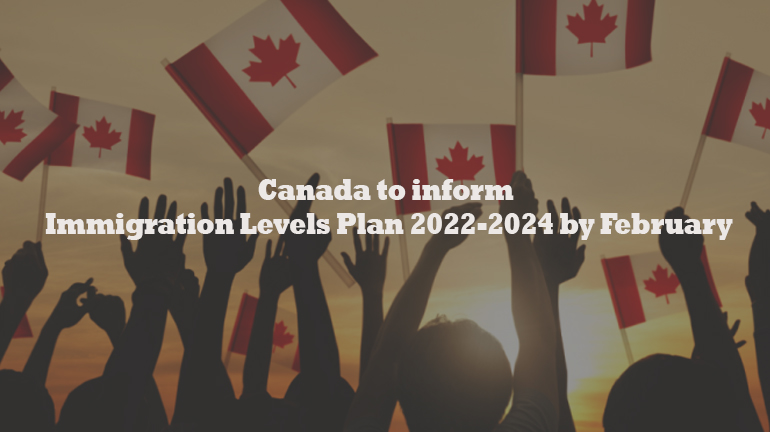 The Canadian government will provide a significant update by February when it announces its Immigration Levels Plan 2022-2024.

The announcement will contain Canada’s immigration targets for this year and the next two years, as well as the number of new immigrants Canada will seek to welcome under its various economic, family, and humanitarian class programs. It will be the first such announcement since Canada made the surprise announcement in October 2020 it would seek to welcome over 400,000 new immigrants per year moving forward, or about 40,000 more per year than its previous targets.

Under Canada’s primary immigration law, the Immigration and Refugee Protection Act (IRPA), the federal government must announce by November 1st of each year when Parliament is sitting. If Parliament is not sitting, the announcement must be made within 30 sitting days of Parliament reconvening.

The announcement usually occurs by November 1st of each year, but it did not happen in 2021 since the Canadian government dissolved Parliament due to its September election. Following the election, a new session of Parliament began on November 22nd.

Parliament sat for 20 days before taking a holiday break. It will reconvene on January 31st, which means immigration minister Sean Fraser must make the new levels plan announcement by Friday, February 11th at the latest. The Canadian government has announced the deadline in recent history and has rarely reported it earlier unless the deadline fell on the weekend. If this remains the case this year, the announcement will likely occur in the second half of the week of February 7.

Of note is that the Canadian government will also very likely table a second levels plan this year by November 1st. However, the regularly scheduled announcement will be the Immigration Levels Plan 2023-2025. It will go ahead as planned, barring the improbable scenario the Canadian government decides to hold an election for the second consecutive year.

Under the current Immigration Levels Plan 2021-2023, Immigration, Refugees and Citizenship Canada (IRCC) will welcome 411,000 new permanent residents to Canada this year. In 2021, IRCC achieved its goal of landing 401,000 immigrants, the highest level in Canadian history. IRCC made the target last year amid the challenging pandemic environment by transitioning temporary residents currently living in Canada to permanent residence.

The current plan aims to welcome 241,500 economic class immigrants to Canada this year through Express Entry, the Provincial Nominee Program, Quebec’s programs, among other pathways. This accounts for 59 percent of Canada’s immigration target.

IRCC is looking to welcome 103,500 family class immigrants through the Spouses, Partners, and Children Program and the Parents and Grandparents Program. This is 26 percent of IRCC’s immigration target.

The remaining 66,000, or 15 percent of the newcomer target, will be welcomed to Canada on refugee and humanitarian and compassionate grounds.

These proportions have been sustained since the mid-1990s when the Canadian government decided to focus admissions on economic class arrivals to help alleviate the economic and fiscal challenges arising from Canada’s aging population and low birth rate. This year’s plans are likely to stick closely to these proportions.

However, what may change is the total number of immigrants Canada chooses to target in the coming years. On the one hand, the Canadian government may be satisfied with their already ambitious targets and decide to keep them as is. This would mean simply continuing to slowly increase annual admissions now that the baseline is over 400,000 immigrants. By way of comparison, the baseline was about 250,000 immigrants annually until 2016. Another consideration is that the Canadian government may want to refrain from significant increases to tackle its backlogs, which currently stand at 1.8 million permanent and temporary resident applicants waiting in the queue.

On the other hand, Fraser has indicated an openness to increasing the targets even further depending on stakeholder feedback. The minister noted he would listen to community groups and employers to see whether they desire to welcome more immigrants.

One may argue that Canada’s immigration targets are already high, and the government should put the brakes on higher levels for a few reasons. For example, backlogs need to be contained, communities across the country have housing affordability issues, and historically speaking, welcoming immigrants amid periods of the economic downturn has hurt the labor force outcomes of newcomers.

Conversely, proponents of higher levels may argue that Canada needs higher levels to support its post-pandemic economic and fiscal recovery and that more immigrants are needed to alleviate labor shortages. Higher targets can also be justified on the grounds they may allow IRCC to reduce its backlogs more quickly. In addition, higher targets may be necessary to accommodate the government’s goal of resettling 40,000 Afghan refugees.

What is certain is we will not be guessing for long as the February 11 deadline is just around the corner.